What is Iron Biofouling and do I have a iron bacteria or slime problem? 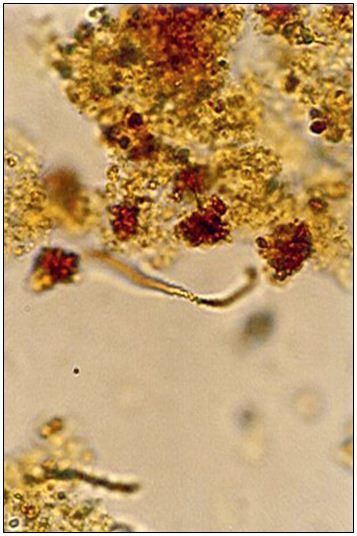 Better described as iron biofouling, the problem popularly known as “iron bacteria” is both complex and widespread. It is a natural phenomenon – microorganisms interacting with metals and minerals in their environments. Iron biofouling affects wells and water systems around the world in all sorts of aquifer environments: contaminated, pristine and climates arctic to tropical. In some places it causes great damage, in others it is considered a minor nuisance.

“Iron bacteria” is one type of biofouling among several, including the characteristic white sulfur slime of sulfur springs. Manganese, and even aluminum biofouling is also found in ground water systems.

Iron and other biofouling consists of biofilms which include living and dead bacteria, their sheaths, stalks, secretions and other leavings, and embedded metal oxihydroxide particles.

Bacterial iron can usually (but not always) be distinguishable visually from purely mineral iron incrustation by its soft, feathery or slimy appearance, and microscopically by the presence of bacterial structures and distinct mineral types. Under the microscope you can see the long, thin filaments or twisting stalks of various types by which microbiologists name the “iron bacteria”. Iron particles are often incrusted on the bacterial structures. However, the bacteria present consist of many types, and the classic looking filaments and stalks in the textbooks may be entirely absent. These biofilms are natural and usually harmless. Natural iron biofouling often acts as a preliminary iron filter in wells and therefore can serve a positive function as well.

Biofouling can be a nuisance. Mineral iron encrustation without the involvement of bacteria is rare in normal ground water environments. Generally, iron biofouling is the cause of iron build up in wells and pipes.

Bacterial iron may build up quickly compared to mineral incrustation. In addition to causing problems in wells, the bacteria may colonize tanks and water treatment devices, as well as spring outfalls.

Iron biofouling generally causes side effects such as slight and intermittent sulfide odor, breakthroughs of red water, and pitting type corrosion of iron and steel.

Do I have a ‘iron bacteria’ problem?

Some or all of these symptons may be present and indicate slime or Iron Related Bacteria (IRB) problems.

If you have noticed any of the problems listed above, please contact us and we will try and advise the best possible treatment product for your problem.

We use cookies on our website to give you the most relevant experience by remembering your preferences and repeat visits. By clicking “Accept”, you consent to the use of ALL the cookies.
Cookie settingsACCEPT
Manage consent

This website uses cookies to improve your experience while you navigate through the website. Out of these, the cookies that are categorized as necessary are stored on your browser as they are essential for the working of basic functionalities of the website. We also use third-party cookies that help us analyze and understand how you use this website. These cookies will be stored in your browser only with your consent. You also have the option to opt-out of these cookies. But opting out of some of these cookies may affect your browsing experience.
Necessary Always Enabled
Necessary cookies are absolutely essential for the website to function properly. This category only includes cookies that ensures basic functionalities and security features of the website. These cookies do not store any personal information.
Non-necessary
Any cookies that may not be particularly necessary for the website to function and is used specifically to collect user personal data via analytics, ads, other embedded contents are termed as non-necessary cookies. It is mandatory to procure user consent prior to running these cookies on your website.
SAVE & ACCEPT